The Power of Research - 10 years of Crohn's and Colitis Research covers a decade of dedicated hard work and support – and the impact that researchers have made towards improving the lives of people affected by Inflammatory Bowel Disease.

Crohn's and Colitis UK has been managing a 4 year Big Lottery funded project on Fatigue in inflammatory bowel disease (IBD), with our research partners at King's College London, University College London and Addenbrookes' NHS Trust. Read more about the Survey on our Outcomes page 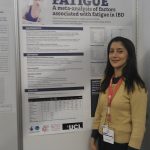 Indira Nathan, Research Fellow at University College London, presented a research poster at the European Crohn's and Colitis Conference in Vienna, in February 2013. The poster refers to a meta-analysis of factors linked to fatigue in inflammatory bowel disease.

We have conducted a survey of the current level of awareness of IBD fatigue among healthcare professionals.  The results show... View Article

June 23, 2011 8:25 pm Published by fatigueinibd Comments Off on Interview with 20 IBD volunteers

Wladzia Czuber-Dochan, Nurse Research Fellow at Kings College, London, has completed face to face interviews with 20 volunteers with IBD, looking at their experience of living with fatigue. The interviews are being analysed, and a literature review on IBD and fatigue has been completed. Both of these stages will lead to the development of the first draft of a fatigue assessment questionnaire...

FInd helpful information, and links, and download our latest publications

Find out more about our research partners from the medical world

Find out by taking our test to assess the severity, frequency and duration of your fatigue.